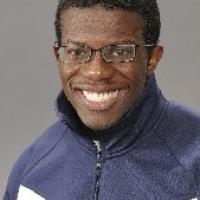 When and where did you begin this sport?
He took up athletics at age five in South Carolina, United States of America. He began practising Para athletics in 2006 at Morehouse College in Atlanta, GA, United States of America.
Why this sport?
He was looking online for walking and running prosthetics and was inspired by a page featuring US Paralympic sprinter Marlon Shirley. He contacted the United States Olympic Committee [USOC] and then persuaded Morehouse College's athletics coach to allow him to have a trial for the team. His sister also inspired him to take up the sport. "My sister was the first person to get me interested in track and field. She was a successful hurdler in high school and I wanted to follow in her footsteps."
Name of coach
Sherman Hart, USA, from 2016

Nicknames
Professor Speed (jeromesingleton.com, 08 May 2014)
Hobbies
Reading, weightlifting, listening to music, playing the piano, dancing, singing, training, playing video games, spending time with friends and family. (Facebook page, 28 Oct 2016; teamusa.org, 18 May 2015)
Memorable sporting achievement
Winning gold at the 2011 World Championships in Christchurch, New Zealand. (Athlete, 17 Jul 2017)
Most influential person in career
His wife and parents. (Athlete, 17 Jul 2017)
Hero / Idol
US American football player Jim Brown. (ossur.com, 12 Mar 2015)
Sporting philosophy / motto
"Live your life like a story. If someone reads it they will know it's possible." (5newsonline.com, 31 Aug 2015)
Awards and honours
He was part of the US 4x100m relay team that was named as the 2013 Paralympic Team of the Year by the United States Olympic Committee [USOC]. This followed the squad's performance at the 2013 World Championships in Lyon, France. The other members of the team were Richard Browne, Blake Leeper and Jarryd Wallace. (insidethegames.biz, 24 Oct 2013)
Other sports
He played American football while attending Dutch Fork High School in Irmo, SC, United States of America. (aarontorres-sports.com, 03 Sep 2012)
Impairment
He was born without a fibula in his right leg due to fibular hemimelia. Doctors amputated his leg below the knee at age 18 months. (ossur.com, 09 Mar 2010)
Other information
HIGHER EDUCATION
He holds a dual degree in mathematics and applied physics from Morehouse College in Atlanta, GA, United States of America. He also has a degree in industrial engineering from the University of Michigan in Ann Arbor, MI, United States of America. He plans to complete a doctorate [PhD] in biomechanics with the aim of standardising the alignment of artificial limbs. (teamusa.org, 01 Oct 2016; washingtonpost.com, 29 May 2012)

SCIENCE
After his freshman year at Morehouse College, he went to NASA's Glenn Research Center in Cleveland, OH, United States of America, to work on a machinery project related to the Mars landing programme. He worked on other projects for NASA and, in 2007, spent time with CERN in Geneva, Switzerland, carrying out research in the field of high energy particle physics. (paralympic.org, 28 Feb 2013; aarontorres-sports.com, 03 Sep 2012; ossur.com, 09 Mar 2010; jeromesingleton.com, 08 May 2014)