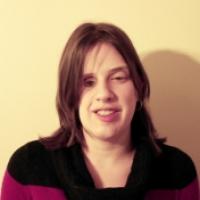 When and where did you begin this sport?
She learnt to swim at the family's camping outings. She joined her first swim club at the age of 12 and began competing a year later.
Name of coach
Craig McCord [national]

Awards and honours
In 2010 she was the community cauldron lighter for Sault Sainte Marie during the torch relay of the 2010 Olympic Winter Games. (vancouver2010.com, 02 Jan 2010)

In 2000 she was awarded the Sault Sainte Marie Medal of Merit. (city.saulte-ste-marie.on.ca, 31 Mar 2010)
Impairment
She lost her vision due to retinoblastoma [retinal cancer] at age three. (saultsportscouncil.ca, 31 Mar 2010; sootoday.com, 20 Sep 2004)
Other information
ATHLETE COUNCIL
She has served as an interim council member of the Canadian Paralympic Committee
[CPC] Athletes Council. (athletics.ca, 01 Dec 2007)

HUSBAND
Her husband is also visually impaired. They met while attending a training academy to introduce them to their new guide dogs. (freescotland.net, 18 Jun 2012)