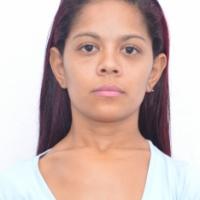 When and where did you begin this sport?
She took up the sport in 2001 at the Tutubarao Swimming School in Natal, Brazil.
Why this sport?
Doctors encouraged her to start swimming as a way of improving her health. "I liked the sport and identified with it."
Club / Team
Sociedade Amigos do Deficiente Fisico do Rio Grande do Norte [SADEF]: Natal, BRA
Name of coach
Rodrigo De Almeida Guilherme Vilar De Queiroz [personal]

She was unable to train during the first half of 2018 due to hernia surgery. Later that year she had an operation for appendicitis. (espn.com.br, 14 Feb 2019)
Awards and honours
In 2020 she was named Female Para Swimmer of the Decade at the Best Swimming awards in Brazil. (bestswimming.swimchannel.net, 31 Dec 2020)