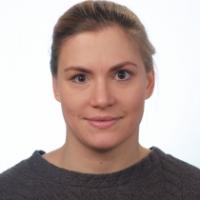 When and where did you begin this sport?
She began swimming at age six in Suwalki, Poland.
Why this sport?
Doctors suggested she try swimming as rehabilitation for a spinal problem she was experiencing.
Club / Team
START Bialystok [POL] / MUKS Olimpijczyk Suwalki [POL]:
Name of coach
Wojciech Seidel [national], POL; Edward Dec, POL

Nicknames
Asia (megatiming.pl, 30 Oct 2015 )
Hobbies
Spending time with friends. (sport.tvp.pl, 04 Sep 2017)
Memorable sporting achievement
Winning gold in the S12 100m butterfly at three consecutive editions of the Paralympic Games between 2004 and 2012. (OSIR w Suwalkach YouTube channel, 15 Dec 2020)
Injuries
She required shoulder surgery in April 2012 and then underwent a second procedure in November 2012. She returned to full fitness in September 2013. (plywacy.com, 18 Dec 2013)
Sporting philosophy / motto
"You have to work hard to make your dreams come true." (megatiming.pl, 30 Oct 2015)
Awards and honours
In 2019 she received the special 20th Anniversary Award from the Polish Paralympic Committee. (wirtualnesuwalki.pl, 12 May 2019)

She was named the 2014 Athlete of the Year by Polish newspaper Gazeta Wspolczesna. (start.bialystok.pl, 12 Feb 2015)

She received a special award for her sporting achievements from the Polish Paralympic Committee in 2013. (bialystok.gazeta.pl, 03 Feb 2013)

In 2013 she was honoured with the Officer's Cross of the Order of Polonia Restituta by the president of Poland. She was also presented with the Knight's Cross of the Order of Polonia Restituta in 2008. (Facebook page, 31 Aug 2017; paralympic.org.pl, 08 Sep 2016)
Other sports
She has represented Poland in Para cross-country skiing, including at the 2020 Paraski4Europe event in Poland. (Facebook page, 01 Mar 2020)
Ambitions
To compete at the 2020 Paralympic Games in Tokyo. (dwutygodniksuwalski.pl, 01 Sep 2020)
Impairment
She was born prematurely, which caused her to have no sight in her right eye and limited vision in her left eye. (plywacy.com, 18 Dec 2013)
Other information
OTHER ACTIVITIES
She has served as president of the IKS Herkules club in Suwalki, Poland, and worked as an instructor for children with an impairment. She has also served as vice president of the Polish Federation of Para Sports. (suwalki24.pl, 01 Oct 2019; paralympic.org.pl, 09 Apr 2019)