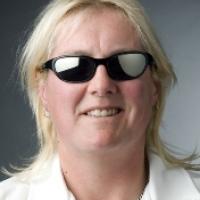 When and where did you begin this sport?
She began competing in 1988
Club / Team
Bundaberg Athletics Club: Australia
Name of coach
Brett Robinson [national], AUS; Les Kuorikoski [personal], AUS

While preparing for competition at the 2012 Paralympic Games in London, she tore her left hamstring at a training camp. The injury resulted in her being unable to compete at the Games. (abc.net.au, 21 Feb 2014)

She needed shoulder reconstruction surgery after competing at the 2008 Paralympic Games in Beijing. (abc.net.au, 21 Feb 2014)
Sporting philosophy / motto
"Go hard or go home." (paralympic.org.au, 13 Jan 2010)
Awards and honours
She was 2000 Sportperson of the Year and 2000 Sportswoman of the Year for the City of Ballarat. (paralympic.org.au, 13 Jan 2010)

She received the Medal of the Order of Australia in 1993 for service to sport as a gold medalist at the 1992 Paralympic Games in Barcelona. (paralympic.org.au, 13 Jan 2010)
Other sports
She has also represented Australia in goalball and powerlifting. (paralympic.org.au, 19 Nov 2011)
Impairment
She is colour blind, short-sighted and light-sensitive. (abc.net.au, 21 Feb 2014; qldathletics.org.au, 07 Mar 2015)
Other information
LAST PARALYMPICS
The 2012 Paralympic Games in London were to be her seventh and final appearance at the Games, until a hamstring injury in preparation meant she was unable to compete. Instead, she is targeting the 2016 Games in Rio de Janeiro as her last appearance at the event. (abc.net.au, 21 Feb 2014)