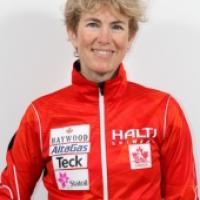 When and where did you begin this sport?
She began para-nordic skiing during the 2007/08 season.
Why this sport?
After her accident she set herself the target of learning how to swim again and complete a half marathon. She then set her sights on cross-country skiing.

Nicknames
Jedi, Yoda (canadianathletesnow.ca, 2009)
Most influential person in career
Her family. (macleans.ca, 12 Mar 2010)
Sporting philosophy / motto
"Life is 10% what happens to you and 90% how you react to it." [Charles R. Swindoll] (paralympic.ca, 01 Mar 2010)
Other sports
Before having her arm amputated, she competed in triathlon at an elite level. After her accident, she started competing in para-triathlons. (cccski.com, 25 Aug 2008)
Famous relatives
Her brother Darren won a gold medal in rowing at the 1992 Olympic Games in Barcelona. Her cousin Gillian Apps was part of the Canadian women's ice hockey team that claimed gold at the 2006 Olympic Winter Games in Turin. (Vancouver, 12 Feb 2010)
Impairment
She collided with a car while training on her bike ahead of the 2006 Long Distance World Triathlon Championships in Canberra, ACT, Australia. Her right arm was amputated as a result of the crash. She is naturally right-handed, but after her accident she had to learn to compete with her left hand. (cccski.com, 14 Mar 2010; Vancouver, 12 Feb 2010)
Other information
RETIREMENT
She announced her retirement from the sport in May 2011. She hoped to focus on her profession as a teacher and spend time promoting Paralympic sport. (cccski.com, 31 May 2011)