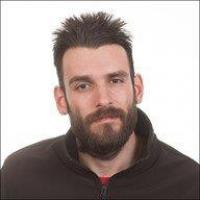 When and where did you begin this sport?
At age 10 he moved to Eugene, OR, United States of America, and took up athletics soon afterwards. He began racing competitively six years later.
Why this sport?
He tried basketball but switched after discovering there were track athletes with an impairment in the area. He loved the sport and found the group gave him the support and encouragement he needed. He was also inspired by his older brother's sporting achievements.
Club / Team
World Wheelchair Sports: Eugene, OR, USA
Name of coach
Kevin Hansen

Famous relatives
His brother Mike Roberts played college basketball for Indiana Hoosiers, and later became a college coach. (projects.registerguard.com, 10 Sep 2016)
Impairment
He was born with a muscular imbalance, which meant the right side of his body did not grow to its full potential. He also has limited reaction time and hand-eye coordination, which affects his ability to stay in one lane when he is racing. (thefreelibrary.com, 27 Oct 2003)
Other information
PARALYMPIC DREAM
After initially failing to be selected for Team USA for the 2016 Paralympic Games in Rio de Janeiro, he planned to quit Para athletics. However, due to the places made available by the ban on Russian athletes at the Games, he was selected for his first Paralympic Games just two weeks prior to the Games starting in Rio de Janeiro. "It's just been kind of a whirlwind. I've always had other plans for things that I've wanted to do for life after track. With this happening, it's just given me some new life." (projects.registerguard.com, 10 Sep 2016)