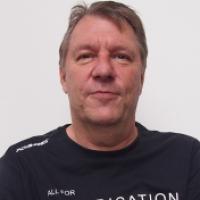 When and where did you begin this sport?
He began Para shooting in 1995 at a rifle club in Vallensbaek, Denmark.
Why this sport?
"After six years in the army I wanted to see if I was still able to shoot."
Club / Team
Naestved Skytteklub: Denmark

Most influential person in career
His family. (Athlete, 08 Feb 2012)
Awards and honours
In 2005 he received the Hans Just Sport Award in Denmark. (paralympic.dk, 2012)

He was named the 2004 Athlete of the Year in Vallensbaek, Denmark. (paralympic.dk, 2012)
Impairment
He struck his head after jumping into shallow water while swimming. His injuries resulted in tetraplegia. (Athlete, 08 Feb 2012; h-g-f.dk, 01 Oct 2009)
Other information
OTHER ACTIVITIES
He has served as president of the Stensved Skytteforening club in Denmark. (sydtid.dk, 06 Nov 2014)