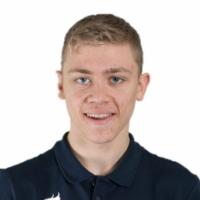 When and where did you begin this sport?
He first began swimming at Holmfirth Pool in England at age four, before becoming a member of the Holmfirth Tiger Sharks training academy.
Club / Team
Borough of Kirklees: England
Name of coach
Mark Lappin [club]
Training Regime
He trains up to 10 times in the water each week, as well as completing four sessions in the gym.

Nicknames
Johnny. (huddnewcoll.ac.uk, 19 May 2016)
Ambitions
To compete at the 2020 Paralympic Games in Tokyo. (pulse2.co.uk, 09 Sep 2016; examiner.co.uk, 04 Aug 2016)
Impairment
He has Charcot Marie Tooth disease. "The condition makes my legs tire quickly so I rely on my upper body strength in the pool." (examiner.co.uk, 04 Aug 2016)
Other information
FUNDRAISING
In the lead up the 2016 Paralympic Games in Rio de Janeiro, he set up a fundraising page with the aim of raising GBP3,000 to help him pay for weekly physiotherapy. He said the treatment was essential to reduce the effects of his condition. "If I stop being able to afford to pay for physio it will put my ability to continue competing in danger because I won't be able to train due to the pain." He eventually surpassed his campaign target. (examiner.co.uk, 04 Aug 2016)