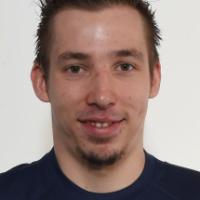 When and where did you begin this sport?
He began competing at age 11.
Why this sport?
Competitive swimming was initially part of his physiotherapy regime.

He was out for three months with a shoulder injury in the early part of 2009. (Athlete, 02 Sep 2012)
Sporting philosophy / motto
"Train hard and be the best." (Athlete, 02 Sep 2012)
Awards and honours
He was appointed Member of the Most Excellent Order of the British Empire [MBE] in the 2013 New Year's Honours list. (gov.uk, 29 Dec 2012)
Impairment
He has cerebral palsy. (telegraph.co.uk, 30 Aug 2012)
Other information
RETIREMENT
He retired from competitive swimming in September 2018. "In August I was admitted to hospital and diagnosed with type 1 diabetes. That's something that I'm still coming to terms with and getting used to. Now feels like a suitable time to step away from the sport and focus on my health." (swimswam.com, 25 Sep 2018)