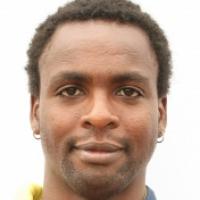 When and where did you begin this sport?
He took up athletics in 1999 in Rio de Janeiro, Brazil, and began competing as a Para athlete in about 2012.
Why this sport?
He used to act as a guide to Brazilian Para athletes such as Adria Santos and Terezinha Guilhermina. After his vision was affected by a neurological problem, he decided to compete in Para athletics himself.
Club / Team
Associacao Joinvilense para Integracao dos Deficientes Visuais [AJIDEVI]: Brazil