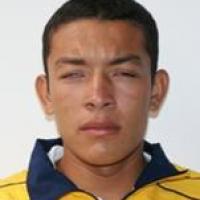 When and where did you begin this sport?
He took up the sport in 2007 in Arauca, Colombia.
Why this sport?
During a rehabilitation programme his teacher and classmates decided to establish a sporting club, and they chose athletics as the main sport.
Club / Team
Club de Limitados Visuales de Arauca [CLIVEAR]: Arauca, COL
Name of coach
Fleider Heredia, MEX, from 2014

Memorable sporting achievement
Winning gold in the javelin at the 2015 Parapan American Games in Toronto, ON, Canada. (Athlete, 22 Oct 2015)
Most influential person in career
His mother, wife and children. (Athlete, 22 Oct 2015)
Sporting philosophy / motto
"With hard work, discipline and perseverance dreams can be achieved. The one who fights is the one who gets what he wants." (llanera.com, 27 Aug 2015)
Awards and honours
In 2016 he received the Silver Acord Award from the Colombian Association of Sports Journalists. (coldeportesarauca.gov.co, 05 May 2017)

In 2015 he received the Ciudad de Arauca Medal from the council of Arauca, Colombia. (araucamia.com, 27 Aug 2015)
Ambitions
To win gold at the 2017 World Championships in London, England. (arauca.gov.co, 31 May 2017)
Impairment
He lost vision in both eyes after being involved in two separate accidents. The first accident occurred at age seven, and the second five years later. (donpetroenlared.com, 2009)
Other information
OTHER STUDIES
He also has a technical diploma in physical education. (senaldeportes.tv, 30 Nov 2015)

CLUB FOUNDER
He is a co-founder of the Club de Limitados Visuales de Arauca [CLIVEAR] in Colombia. (senaldeportes.tv, 30 Nov 2015)