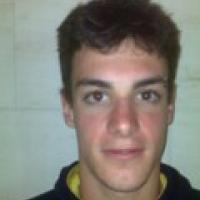 When and where did you begin this sport?
He learned how to swim at age three in Valencia, Spain. He took up the sport at age 12 in La Eliana, Spain.
Why this sport?
Doctors encouraged him to start swimming as therapy for his impairment, and later suggested he try competing in Para swimming. "As a child I liked football and basketball, but in the water my impairment went more unnoticed. When I was two or three I started swimming, but stopped for a few years. I came back when I was nine or 10 and I haven't stopped since. I started going to lessons, I was doing quite well and they asked me if I would join the sports club. When I started competing I stood out, I was the best swimmer in the club and the only one with an impairment."
Club / Team
CD Aquatic Campanar: Valencia, ESP
Name of coach
Miguel Vazquez Calvo [personal], ESP, from 2016
Training Regime
He trains at the High Performance Centre [CAR] in Sant Cugat, Spain. He has two swimming and one weightlifting sessions a day. "As the competition approaches we train less, but when there are two or three months left before an event we can train four to five hours in the water and two to three hours on dry land."

He was presented with the Medal of the City in Terrassa, Spain, in recognition of his performance at the 2012 Paralympic Games in London. (estoesdxt.es, 03 Jul 2013)
Famous relatives
His partner Sarai Gascon has represented Spain in Para swimming, and competed at three consecutive Paralympic Games between 2008 and 2016, winning five silver medals and one bronze. She also won seven medals, including three gold, at the 2020 European Championships in Funchal, Portugal [held in 2021]. (dxtadaptado.com, 02 Sep 2019; SportsDeskOnline, 31 Jul 2021)
Ambitions
To compete at the 2020 Paralympic Games in Tokyo. Outside of competing, he aspires to become a sports psychologist. (proyectofer.es, 11 Feb 2020; sportlife.es, 09 Mar 2021)
Impairment
He has functional limitation in his left leg. The impairment is due to a neuroblastoma, a type of cancer that affected his spine. (Athlete, 15 Aug 2018; as.com, 30 Mar 2018)
Other information
FURTHER EDUCATION
He has studied remotely for a degree in psychology at the Catholic University of Murcia [UCAM] in Spain. "I apply my knowledge for the sport, both for myself and with my partner Sarai Gascon. The psychological part is very important, it does not matter how well prepared you are at a physical level, if you are not mentally prepared, the competition will not go as you expect." (dxtadaptado.com, 02 Sep 2019; Athlete, 15 Aug 2018; sportlife.es, 09 Mar 2021)

EARTHQUAKE EXPERIENCE
In September 2017 he was in Mexico City, Mexico, when a 7.1-magnitude earthquake struck. He was training at the Mexican Paralympic Centre [CEPAMEX] along with his national teammate Sarai Gascon and their coach Miguel Vazquez Calvo ahead of the 2017 World Championships, which were rescheduled for a later date following the earthquake. "We were in the room when we felt the floor moving. We got out, the corridors moved from one side to the other, the floor and ceiling vibrated a lot. The building did not have major damage but the gymnasium had some cracks and the water drained out of the pool." (marca.com, 21 Sep 2017; superdeporte.es, 20 Sep 2017; ondacero.es, 20 Sep 2017)