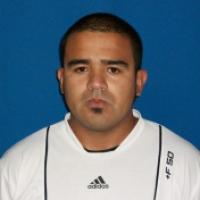 When and where did you begin this sport?
He began powerlifting at age 22.
Why this sport?
He was supposed to attend a concert of an Argentinian band but he went to the wrong venue. There was a powerlifting training session taking place with the national team coaches and one of them asked if he wanted to start training.
Club / Team
Quilmes: Argentina
Name of coach
Adrian Zanola [national], ARG

He has had tendinitis in his right shoulder since competing at the 2012 Paralympic Games in London. (paralympic.org, 08 Apr 2015)
Sporting philosophy / motto
"Train so hard that your idols became your rivals." (quedigital.com.ar, 26 Aug 2017)
Awards and honours
He was flag bearer for Argentina at the opening ceremony of the 2017 World Championships in Mexico City, Mexico. (Twitter profile, 03 Dec 2017)
Ambitions
To compete at the 2020 Paralympic Games in Tokyo. (quedigital.com.ar, 26 Aug 2017)
Impairment
He has hip dysplasia. (youknowtusabes.blogspot.com, 05 Jul 2012)
Other information
ROLE MODEL
He believes becoming an elite powerlifter has changed him in a positive way, and he hopes that his story can inspire others. "My life was a disaster. I had problems with alcohol and addictions. My objective is to share what I gone through to help others who have an impairment, are living on the on the street or taking drugs. I want to show them there is another world, another choice. We go on the streets, inviting young people to join us. If they are not interested in powerlifting, we encourage them to try athletics, swimming or whatever. When you change one young person's life, you might have changed the world and that is priceless." (quedigital.com.ar, 26 Aug 2017)