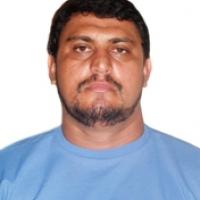 When and where did you begin this sport?
He began powerlifting in 2005.
Why this sport?
After being shot, he was encouraged to try para-sports while he was doing hydrotherapy as part of his rehabilitation. "When I was shot, I thought my life was over. But sport has allowed me to continue having a social life and that to me is everything."

Impairment
In 2000 he was paralysed from below the waist after being shot and taken hostage in a Brazilian prison while serving in the military police. The incident happened as he was trying to stop a mass jail break-out staged to enable the escape of a notorious Brazilian bank robber from Alcacuz prison in Nisia Floresta, Brazil. (mossorohoje.com.br, 12 Aug 2015)
Other information
PASSED AWAY
He died from a heart attack in January 2015, just days after winning gold at the 2015 World Cup event in Rio de Janeiro, Brazil. (paralympic.org, 28 Jan 2016; tribunadonorte.com.br, 28 Jan 2016)