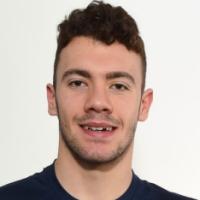 When and where did you begin this sport?
He began swimming at age nine.

He missed eight weeks of action in 2013 after he was diagnosed with Graves' disease, a thyroid condition that caused significant weight loss. (paralympic.org, 2013)
Sporting philosophy / motto
"Keep focused and work hard, even when it hurts." (swimming.org, 2013)
Awards and honours
He was appointed Member of the Most Excellent Order of the British Empire [MBE] in the 2013 New Year Honours list. (paralympic.org, 2013)

He was named the BBC Young Sports Personality of the Year for 2012. (bbc.co.uk, 16 Dec 2012)
Impairment
He was born with cerebral palsy. (shieldsgazette.com, 15 Nov 2013)
Other information
RETIREMENT
He retired from competitive swimming in October 2018 with the intention of becoming a coach. "It's time for a new challenge." (bbc.co.uk, 18 Oct 2018)

CLASSIFICATION SWITCH
In April 2014 he was reclassified and moved from the S7 class to the S8 class. He had competed in S7 class since 2009 and initially found the change difficult. "One minute you're a world champion, a Paralympic champion with world records to your name, the next you're barely making finals, barely making European teams when you've been to the Paras and the worlds." (bbc.co.uk, 14 Aug 2014)