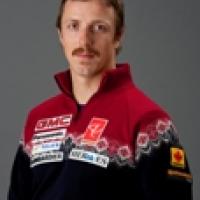 When and where did you begin this sport?
He learned to ski at age 13.
Why this sport?
"It became clear to me that sliding around on snow and flying through the air was how I wanted to live my life. Being a skier gave me an outlet to express my creativity."

In January 2013 he received a Queen's Diamond Jubilee Medal. (newswire.ca, 25 Jan 2013)
Other sports
Before his accident he represented British Columbia in freestyle skiing before moving into coaching. (vancouver2010.com, 21 Mar 2010)
Impairment
In March 2004 he broke his back in a test jump in Vernon, BC, Canada, which resulted in paraplegia. He sustained his injury while performing his signature move, the front-flip. He overshot the landing hill and fell 30 metres. Doctors inserted two rods and 14 bolts into his back to stabilise his spine. (youtube.com, 10 Jun 2010)
Other information
RETIREMENT
In November 2014 he announced his retirement from competitive para-alpine skiing. "I maybe have a few good seasons left in me, but it’s also really nice to conclude my career on a positive note." (theglobeandmail.com, 13 Nov 2014; joshdueck.com, 09 Feb 2015)

EMOTIONAL ANNIVERSARY
He won a silver medal in the men's sitting downhill event at the 2014 Paralympic Winter Games in Sochi. His success was 10 years to the day since he broke his back in a test jump. "Ten years ago today I broke my back and it's a very powerful moment of time. Moving forward in life is very important and I'm proud of that." (paralympic.org, 13 Mar 2014)

WORLD FIRST
In 2012 he became the first sit-skier to land a back flip, on a specially built ramp in British Colombia, Canada. (channel4.com, 25 Nov 2012)

DOCUMENTARY STAR
The documentary 'Freedom Chair' is a film about his life and shows how he returned to skiing after his 2004 injury. It was released in October 2011 and was awarded Best Mountain Sports Film at the 2011 Banff Mountain Film Festival in Canada. In February 2014, he starred in a three-part documentary series called Milestones of Champions: The Journey of Canada's Paralympians. The series focused on eight Canadian athletes, highlighting their achievements and the challenges they faced while preparing for the 2014 Paralympic Winter Games in Sochi. (liveitloveit.org, 07 Nov 2011; ami.ca, 12 Feb 2014; sochi2014.com, 03 Mar 2014)

ROLE MODEL
He has worked as a public speaker and also appeared on television since his accident. He is aware he has become a role model for younger people. "I'm fortunate that I've been able to take a traumatic situation in my life and do something positive with it. I get to live the dream and travel around being a skier. But I'm human and prone to making mistakes. I always warn people that if they look to me as a role model, I'm just working my way through life trying to have a better understanding of what my purpose is. If people can understand that and still want to use me as a role model, then I'm super flattered." (alpinecanada.org, 11 Jun 2013)

TOUGH TIMES
In an interview reflecting on the period that followed his accident, he admitted he had been suicidal because he had struggled to deal with the consequences of his injury and the extreme pain that went with it. He was given a drug seven times more potent than morphine, but it had no effect and he asked his father to "pull the plug" as he could not face the uncertainty of his future. He began skiing again nine months after his accident. (paralympic.ca, 10 Aug 2010; youtube.com, 10 Jun 2008)