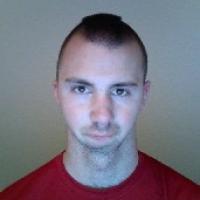 When and where did you begin this sport?
He was very active in sports in both high school and community college. He took up para-athletics competitively in 2009.
Why this sport?
His parents got him involved with sports.

Memorable sporting achievement
Winning a bronze medal in the 100m event at the 2013 World Championships in Lyon, France. (pressherald.com, 24 Aug 2013; Instagram profile, 17 Sep 2015)
Most influential person in career
His parents. (pressherald.com, 24 Aug 2013)
Sporting philosophy / motto
"You can do anything you set your mind to as long as you don't give up." (norwaysavingsbank.com, 2013)
Impairment
He was born missing a tongue, part of his jaw, both feet and his arms below the elbow. (norwaysavingsbank.com, 2013; pressherald.com, 24 Aug 2013)
Other information
COACH
He has coached the Oxford Hills Middle School girls’ football team in South Paris, ME, United States. (hebronacademy.org, 24 Oct 2012; Twitter profile, 15 Jun 2015)

OTHER ACTIVTIES
He has served as the vice president of the Never Say Never Foundation, which was founded by fellow US para-athletes Regas Woods and Nick Stilwell to help rehabilitate children with an impairment through sport in the United States. (neversayneverfoundation.org, 17 Feb 2013; helpinghandsgroup.org, 25 Jan 2015)