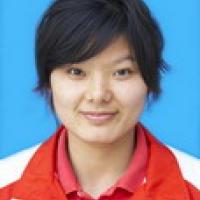 When and where did you begin this sport?
She took up the sport in 1998 in Wuxi, People's Republic of China.
Why this sport?
She wanted to improve her physical condition and challenge herself every day.
Club / Team
Jiangsu Province: China

She suffered an elbow injury during the 2004 Paralympic Games in Athens, and another elbow injury while preparing for the 2008 Games in Beijing. (sina.com.cn, 09 Sep 2008)
Sporting philosophy / motto
"Never give up. Scale new heights." (Athlete, 17 Jul 2017)
Awards and honours
She has received the National March 8th Red Banner Pace-Setter award and the National May 4th Youth Medal in the People's Republic of China. She has also been presented with the National May 1st Labour Medal by the All-China Federation of Trade Unions. (wap.yzwb.net, 05 Mar 2022)
Impairment
The impairment to her left leg is a result of the effects of polio. She was diagnosed with the illness at age four. (Athlete, 17 Jul 2017)