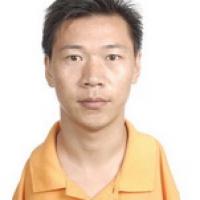 When and where did you begin this sport?
He took up Para swimming in 1995.
Why this sport?
He was identified as an athlete with potential by the sports commission of Hubei, People's Republic of China.

Nicknames
Armless Dragon (163.com, 24 Aug 2012)
Sporting philosophy / motto
"In life, nothing is more important than smiling." (rmhb.com.cn, 17 May 2013)
Awards and honours
He was named the 2005 Chinese Para Athlete of the Year. (qq.com, 01 Sep 2008)
Impairment
His arms were amputated at age three after he accidentally touched an electric cable. (21hubei.com, 18 Dec 2014)
Other information
RETIREMENT
He has retired from competitive Para swimming. (chinadp.net.cn, 18 Oct 2016)

LIFE SAVER
As a child he saved a boy from drowning. He was swimming in a reservoir near to his school when he noticed another boy had fallen into the water. He used his legs to keep the child afloat and pushed him to safety. (sina.com.cn, 16 Sep 2008)