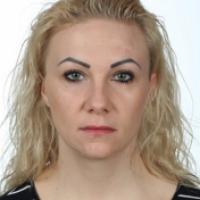 When and where did you begin this sport?
She took up Para athletics at age 13.
Why this sport?
She tried a number of sports growing up, including basketball, swimming and football. Her sports teacher later noticed her talent and introduced her to athletics coach Boguslaw Jusiak.
Club / Team
MUKS Kadet Rawicz: Poland
Name of coach
Boguslaw Jusiak [personal], POL, from 2006

Hobbies
Shopping, going to music concerts, dancing, photography, aerobics, watching films, going to the gym, listening to music, spending time with friends. (Facebook profile, 24 Feb 2021)
Memorable sporting achievement
Winning gold in the T20 long jump at the 2012 Paralympic Games in London. (Facebook page, 04 Sep 2019; wtkplay.pl, 21 Dec 2016)
Most influential person in career
Her family, and coach Boguslaw Jusiak. "He [Jusiak] is like a second father." (niepelnosprawni.pl, 19 Jan 2016; paralympic.org.pl, 14 Nov 2019)
Injuries
In July and August 2019 she was impacted by an Achilles tendon injury. (Facebook page, 01 Aug 2019)
Awards and honours
She has twice been awarded the Gold Cross of Merit by the president of Poland, in 2013 and 2016. (prezydent.pl, 07 Feb 2013, 05 Oct 2016)
Other sports
She has competed in 100m hurdles competitions against able-bodied athletes. (poznan.sport.pl, 02 Sep 2012; gloswielkopolski.pl, 20 Oct 2012)
Ambitions
To win a gold medal at the 2020 Paralympic Games in Tokyo, and to set a new world record. (radiopoznan.fm, 08 Jan 2020)
Other information
MOTHERHOOD
She gave birth to her son in 2017, but only took one month off from athletics after giving birth. She was determined to return to the sport as soon as she could as she was still frustrated with not winning gold at the 2016 Paralympic Games in Rio de Janeiro. "I came back to training one month after delivery. It was a difficult time. I cried many times during training, I thought that I couldn't do it. I also had this anger after the 2016 Paralympic Games, where I lost gold there to [Croatian long jumper] Mikela Ristoski. I wanted to come back to competition as quick as possible to show her who dominates in long jump. My son has given me an extra boost of motivation. Everything I do, I do for him. When I was a single, I could do whatever I wanted. Now it's different. My whole life is subordinated to him." (magazynsportowiec.pl, 20 Sep 2018, 14 Nov 2019)

EMOTIONAL MEDALS
A few days after she returned to Poland following her gold medal win at the 2015 World Championships in Doha, Qatar, her grandmother passed away. A year later during the last visit in hospital she promised her grandfather that she would win a medal for him at the 2016 Paralympic Games in Rio de Janeiro. She fulfilled the promise, but while she was in Brazil her grandfather died from a heart attack. "It's my personal tragedy, a day after winning a medal, my grandfather passed away, so I couldn't be happy about this medal. Fortunately, my grandpa saw my performance, he even recorded it as well as the opening ceremony for me, he just did not have time to see the closing ceremony. The medal from Rio is for him, and the gold from Qatar was for grandmother." (rp.pl, 03 Oct 2016; wtkplay.pl, 21 Dec 2016; przegladsportowy.pl, 15 Sep 2016)