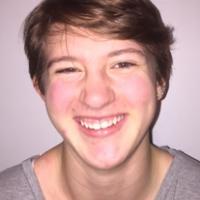 When and where did you begin this sport?
She got into athletics at middle school in 2015/16, and discovered Para athletics the following season.
Why this sport?
She initially competed against able-bodied children at school, until her physical education teacher suggested she try Para sports.

Ambitions
To compete at the 2020 Paralympic Games in Tokyo. (kaseystrokejourney.blogspot.co.uk, 21 Feb 2017)
Impairment
She had a stroke at birth, resulting in hemiparesis. She is also sensitive to loud noises and crowded, busy environments. (kaseystrokejourney.blogspot.fr, 26 Apr 2017)
Other information
CONFIDENCE THROUGH SPORT
Her mother, Terri Nickel, says that Kasey became discouraged after initially competing against able-bodied children at school. But after she was encouraged to try Para athletics she regained her confidence, and was encouraged to pursue the sport at elite level. "We put Kasey in the [2016] Challenge Games. It was so amazing to see her compete with other kids who are similarly affected. She long jumped for the first time and qualified to go to junior nationals. She ran the 100m, shot put and discus. The director of the meet took us aside and encouraged us to get her in more events at Endeavor Games in Edmond, Oklahoma. So we did. She met Paralympic gold medallists and was inspired. She set national records in several events and competed in javelin and the 200m for the first time. I can't tell you how this made her feel. She went from a kid that was down on herself to one that had confidence again." (kaseystrokejourney.blogspot.fr, 21 Feb 2017)