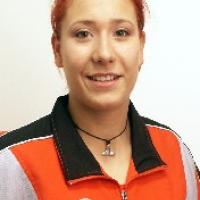 When and where did you begin this sport?
She took up the sport at age 16 in Leverkusen, Germany.
Why this sport?
She encountered Paralympic sports as a teenager. While testing a new walking prosthesis, she was asked about her interest in Paralympic sports. Joerg Frischmann, German para-athlete and director of TSV Bayer 04 Leverkusen, encouraged her to get involved.
Club / Team
TSV Bayer 04 Leverkusen: Germany
Name of coach
Roderick Green [husband], USA, from 2004; Willi Gernemann [national], GER