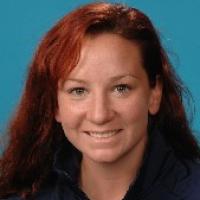 When and where did you begin this sport?
She took up the sport in 2007.

Nicknames
Katy (theweconference.com, 01 Oct 2011)
Injuries
She took time off due to several injuries. She suffered a back injury before the qualifying race for the 2008 Paralympic Games in Beijing. She also fell on her neck and required stitches on her face. (glendalenewspress.com, 04 Jan 2011)
Famous relatives
Her husband Jay Cramer is a comedian, and has worked with comedy actors Adam Sandler and Martin Lawrence. (chicagonow.com, 08 Jun 2012)
Impairment
She was born without legs. (theweconference.com, 01 Oct 2011)
Other information
ACTRESS
In 2012, she co-starred with her husband Jay in a non-profit short film called Recalculating. The film is about how a runner resumes her life after losing her legs in a car accident, and of her father’s emotional journey. (reelchicago.com, 20 Dec 2012)