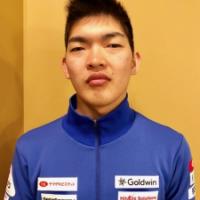 When and where did you begin this sport?
He began the sport at age seven at his primary school in Gifu, Japan.
Why this sport?
He lived in an area with heavy snowfall so skiing was popular. One of his teachers suggested the sport to him and he tried it during a physical education class.
Club / Team
Tsuchiya Holdings: Japan
Name of coach
Kazutoshi Nagahama [national], JPN

Memorable sporting achievement
Competing at the 2014 Paralympic Winter Games in Sochi, and qualifying for the 2018 Games in Pyeongchang. (Athlete, 09 Mar 2018)
Most influential person in career
His school teacher who encouraged him to try the sport. (Athlete, 09 Mar 2018)
Sporting philosophy / motto
"Be positive about everything." (Athlete, 08 Mar 2014)
Awards and honours
In 2015 he received an Excellence Award from the Gifu Sports Association in Japan. (gifu-taikyo.jp, 02 Apr 2015)

In 2013 he received an Achievement Award from the Gifu Prefecture Para Sports Association in Japan. (pref.gifu.lg.jp, 19 Mar 2014)
Impairment
He has cerebral palsy. (Athlete, 08 Mar 2014)