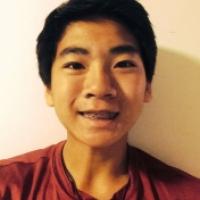 When and where did you begin this sport?
He took up para-athletics with Arizona Heat in Mesa, AZ, United States of America.
Why this sport?
His mother encouraged him to take up para-sport.

Hero / Idol
US wrestler Anthony Robles. (statepress.com, 11 Sep 2012)
Impairment
He was born with a congenital birth defect affecting his right leg. He was born missing several bones from the femur down, including the knee, tibia, ankle and foot bones. At age four his leg was amputated above the knee. (statepress.com, 11 Sep 2012; healio.com, Aug 2010)
Other information
FROM PEOPLE'S REPUBLIC OF CHINA TO UNITED STATES OF AMERICA
He was born in a rural area outside of Zhaoqing, People's Republic of China, but was left by his parents outside a neurological centre at a hospital in the city. The staff named him Zhao Pan and he was moved to an orphanage where he spent the next four years until he was adopted by Kyle Messner and moved with her to United States of America. She named him Kevin Matthew Zhao Pan Messner. (healio.com, Aug 2010)