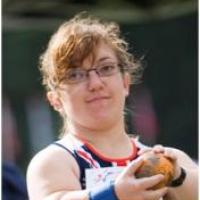 When and where did you begin this sport?
She began athletics at age 17.
Why this sport?
Back problems forced her out of swimming, so she started athletics training.
Club / Team
City of Portsmouth: Portsmouth, ENG

Hobbies
Following Formula One motor racing. (paralympics.org.uk, 29 Jan 2010)
Famous relatives
Her mum June became England's national pistol champion in 1990, and her older sister Louise is an international level shooter who has represented England at multiple Commonwealth Games. Louise was a gold medallist in the 50m Rifle 3 Position event at the 2006 Commonwealth Games in Melbourne. (timesonline.co.uk, 25 Feb 2005, paralympics.org.uk, 29 Jan 2010)
Impairment
She is a person of short stature. (bbc.co.uk, 30 Jun 2005)
Other information
OTHER ACTIVITIES
As a child she had a cameo appearance alongside Val Kilmer in the 1988 film Willow. (uka.org.uk, 29 Jan 2010)