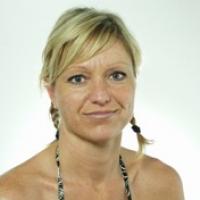 When and where did you begin this sport?
She began swimming at age three and competing at age 10. Injured in a motorcycle accident in 1991, she did not begin to seriously compete in para-swimming competitions until 2002.
Why this sport?
She chose the sport because her whole family swam and played water polo.
Club / Team
PSV Union Neumunster : Germany
Name of coach
Manfred Bruhn [father], GER, from 1973; Ute Schinkitz [national], GER
Training Regime
She trains 20 to 25 hours a week.

In 2012 she received the BAMBI Award for her achievements and for her volunteer work in rehabilitation and integration for people with an impairment. (paralympic.org, 28 Nov 2012)

In 2005 she was awarded the Silbernen Lorbeerblattes [Silver Bay Leaf], a badge of honour given for outstanding achievements in the fields of sporting and artistic life. (kirsten-bruhn.de, 12 Mar 2010)
Famous relatives
Her partner Phillip Semechin has been the coach of the German national para-swimming team. (schwaebische.de, 02 May 2015; woman.brigitte.de, 06 Mar 2014)
Impairment
In 1991 she was involved in a motorcycle accident while on holiday on the Greek island of Kos. She has permanent damage to her spinal cord and incomplete paraplegia. (kirsten-bruhn.de, 04 May 2015)
Other information
OTHER ACTIVITIES
She has worked in the public relations department of the Accident Hospital in Berlin, Germany and as an ambassador for the German Red Cross and Den Weissen Ring [The White Ring], an organisation which helps victims of crime in Germany. (kirsten-bruhn.de, 04 May 2015; tagesspiegel.de, 03 Nov 2014)

DOCUMENTARY
In 2013 she was a major character in the documentary called 'Gold - du kannst mehr als du denkst' ('Gold - you can do more than you think'), which was about her life. (kirsten-bruhn.de, 04 May 2015)