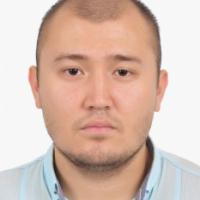 Why this sport?
"The Club of Adaptive Sports' director, Nuraly Kulyshev, found me and thanks to him I got involved in sports. A year after I had begun sports for the impaired, I became master of sport in Para athletics."
Club / Team
Aktau Sports Club for the Impaired: Kazakhstan
Name of coach
Alexander Kabargin, from 2009

He has received the titles of Master of Sport of International Class in Para swimming and Master of Sport in Para athletics in Kazakhstan. (sknews.kz, 31 Jul 2018)
Other sports
He has competed in Para athletics, winning three gold medals at the national championships. (tumba.kz, 31 Dec 2015)
Impairment
He lost his right arm due to an explosion during a New Year celebration in 2000. (tumba.kz, 31 Dec 2015; kaztransoil.kz, 16 Aug 2016)
Other information
ENGINEER
Since 2014, he has worked as engineer with an oil company in the Mangystau region, Kazakhstan. (sknews.kz, 31 Jul 2018)