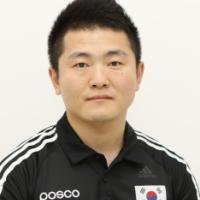 When and where did you begin this sport?
He took up the sport in 2014 in Chuncheon, Republic of Korea.
Why this sport?
The sport was suggested to him by a staff member at his university. He was also influenced by his teammates and coach Kim Jung-Ho. "It is a very macho game. It allows for body checks and stick checks, which is a good fit for my personality."
Name of coach
Han Min-Su [national], KOR
Preferred position / style / stance / technique
Defence

Nicknames
Eurasian Lynx [because his personality is similar to the animal]. (CBS YouTube channel, 19 Apr 2018)
Hobbies
Listening to music, watching movies, sports. (Athlete, 10 Mar 2018)
Memorable sporting achievement
Winning bronze at the 2017 World Championships A-Pool in Gangneung, Republic of Korea. (Athlete, 10 Mar 2018)
Most influential person in career
Coach Kim Jung-Ho. (Athlete, 10 Mar 2018)
Hero / Idol
Korean Para ice hockey player Jung Seung-Hwan, US Para ice hockey player Declan Farmer. (Athlete, 10 Mar 2018)
Other sports
He competed in rowing at the 2018 National Para Games in Republic of Korea. (sports.chosun.com, 24 Oct 2018)
Impairment
His left foot was amputated in 2000 after he fell off a train in the Democratic People's Republic of Korea. (koreatimes.co.kr, 19 Oct 2016; premium.chosun.com, 20 Sep 2016)
Other information
FROM DEMOCRATIC PEOPLE'S REPUBLIC OF KOREA TO REPUBLIC OF KOREA
Born in North Hamgyong Province, Democratic People's Republic of Korea, he began living on his own at age eight as his family could not afford to take care of him. He was discovered by his uncle, who helped him leave the country and move to the Republic of Korea in 2001. He was later reunited with his father, but struggled to live with him, and went on to spend time at an orphanage and in community housing for former DPR Korean residents before finding his own home. In 2014 he was reunited with his mother through a television programme that reconnects separated family members. (koreatimes.co.kr, 19 Oct 2016)