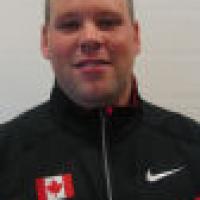 When and where did you begin this sport?
He took up para-athletics at age 12.
Why this sport?
He played football and baseball as a child but struggled to compete against the other children. His physiotherapist was into athletics and suggested he try the sport.
Club / Team
Cruisers Sports: Mississauga, ON, CAN
Name of coach
Ken Hall [club]; Peter Eriksson [national], SWE

Hobbies
Supporting American football team Pittsburgh Steelers and Canadian baseball team Toronto Blue Jays. (paralympic.ca, 15 Aug 2015)
Injuries
His preparations for the 2011 World Championships in Christchurch, New Zealand, were hampered when he was hit by car. His leg injuries healed in time for him to compete at the event. (bramptonguardian.com, 28 Aug 2012)
Sporting philosophy / motto
"Stay with it. It might be hard in the beginning but when it comes together, it will all be worth it." (cruisers-sports.com, 01 Mar 2010)
Impairment
He was born with cerebral palsy. (paralympic.ca, 15 Aug 2015)
Other information
FAMILY SUPPORT
After taking up shot put and discus at age 12, his parents built him a throwing circle in their yard to help him practice. (paralympic.ca, 15 Aug 2015)