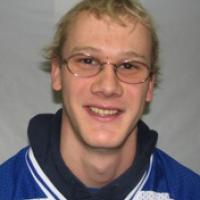 When and where did you begin this sport?
He began swimming when he was nine years old and competed with an able bodied team. He took part in his first competition for swimmers with a disability when he was 14.
Training Regime
He does a water workout at 7am each morning. He also does a weights session three days a week.

Hobbies
Paintball. (facebook.com, 04 Mar 2010)
Awards and honours
He was the most decorated United States men's swimmer at the 2006 IPC World Swimming Championships, winning four medals. He backed this up with another four medals at the Paralympic Games in Beijing, 2008. (US Paralympics, 04 Mar 2010)

He won the 2003 Greater Augusta Sports Council Award. (US Paralympics, 04 Mar 2010)
Impairment
He was born with cerebral palsy. (The Augusta Chronicle, 18 Dec 2011)
Other information
RETIREMENT PLANS
He plans on retiring after the 2012 Paralympic Games in London. "Let's just go out with a bang. "Let's just go out and put on a show." Upon retirement he plans to finish his degree, which is undecided at the moment, at Augusta State University. (The Augusta Chronicle, 18 Dec 2011)