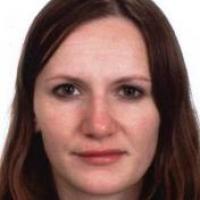 When and where did you begin this sport?
She began training in para-canoe sprint in 2013 in Krasnodar, Russia.
Why this sport?
She decided to begin training simultaneously in para-canoe sprint and para-athletics. After breaking her hand at training, she had to give up athletics and focused on para-canoe for the 2016 Paralympic Games in Rio de Janeiro.
Club / Team
Kuban Physical Culture Sport Club for the Disabled: Krasnodar, RUS
Name of coach
Alexey Arzamastsev, RUS, from 2013; Mikhail Burmantov, RUS, from 2006
Training Regime
She trains six days per week.

Nicknames
Lara (kp.ru, 30 Aug 2012)
Hobbies
Going to the theatre. (kubnews.ru, 09 Nov 2015)
Memorable sporting achievement
Winning bronze in javelin at the 2012 Paralympic Games in London, and silver in para-canoe sprint at the 2014 World Championships in Moscow, Russia. (Athlete, 25 Dec 2015)
Most influential person in career
Her mother. (Athlete, 24 Apr 2012)
Sporting philosophy / motto
"Sport is one of the best ways to find yourself in this life, to make friends, live interestingly, and also have financially stability." (ngkub.ru, 22 Oct 2012)
Awards and honours
She holds the title of Honoured Master of Sport in Russia. (Athlete, 25 Dec 2015)

In March 2014 she took part in the 2014 Paralympic torch relay, lighting the Paralympic cauldron in Krasnodar, Russia alongside the city's mayor Vladimir Evlanov. (torchrelay.sochi2014.com, 05 Mar 2014)
Famous relatives
Her father was an international hammer thrower, while her mother competed in the long jump for Russia. Her sister Valeria won the pole vault at the 2006 World Junior Championships, and her brother Gleb has competed in hammer throw. (ngkub.ru, 22 Oct 2012)
Impairment
Doctors diagnosed a tumour on her spine at age nine. Her parents were told she might not live, but she underwent a successful operation on her back to have the tumour removed. Her mobility was affected as a result of the surgery. (ngkub.ru, 22 Oct 2012; smartnews.ru, 18 Sep 2012; kp.ru, 30 Aug 2012)