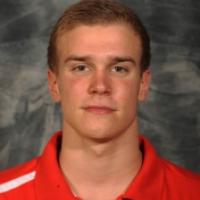 When and where did you begin this sport?
He began swimming at a young age but did not start competing until he was age 10.
Why this sport?
His parents introduced him to the sport.
Club / Team
Holbaek Svommeklub: Denmark
Training Regime
He trains for an average of 25 hours a week.

Nicknames
Pirate ["My swimming friends from many years ago thought it suited me well, and it stuck."] (tritalk.dk, 01 Apr 2015)
Sporting philosophy / motto
"Full speed ahead." (Instagram profile, 01 Mar 2017)
Other sports
He has represented Denmark in Para triathlon at the European and world championships. (SportsDeskOnline, 03 Mar 2017; tritalk.dk, 01 Apr 2015)
Impairment
He was born with a condition called proximal femoral focal deficiency, which affected the development of his right leg. (Facebook page, 20 Jan 2017)
Other information
TAKING UP TRIATHLON
Having competed in swimming at the 2012 Paralympic Games in London, he then decided to take up Para triathlon. "I was looking for a new challenge and more variety in my training so I started Para triathlon, which was a new sport at the time. The Danish Paralympic Committee was looking for competitors and they had been following my training. In 2013 I was selected for the World Cup event in London [England] and it all took off from there." (tritalk.dk, 01 Apr 2015)

RETURN TO SWIMMING
After failing to qualify in Para triathlon for the 2016 Paralympic Games in Rio de Janeiro, he switched his focus back to swimming in a bid to make the Danish Paralympic team. He was a late addition to the squad, receiving his call-up at the end of August, and he went on to compete in three events at the 2016 Games. (dr.dk, 06 Sep 2016; sn.dk, 18 Feb 2016)

OCCUPATION
In November 2016 he opened his own massage therapy business in Holbaek, Denmark. (sn.dk, 27 Nov 2016)