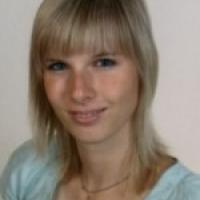 When and where did you begin this sport?
She took up athletics at age 10 at school in Slovakia.
Why this sport?
"I was a lively child and my father took me to the stadium to watch athletics."

She tore her knee ligaments at the 2003 European Championships. She required seven months to recover from the injury. (Athlete, 16 Dec 2010; brunel.ac.uk, 30 Nov 2009)
Sporting philosophy / motto
"Be happy about every little good thing that happens to you." (Athlete, 16 Dec 2010)
Impairment
She was born with an underdeveloped right hand. (timesofindia.com, 13 Dec 2009)
Other information
OCCUPATION
She has spent time teaching English to students at university. (Athlete, 26 Aug 2012)