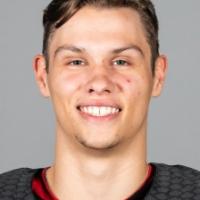 When and where did you begin this sport?
He took up the sport at age 10 through the Easter Seals Para ice hockey programme in Canada.
Why this sport?
"I fell in love with it right away. It was a feeling of freedom I've never experienced before."
Name of coach
Ken Babey [national], CAN
Preferred position / style / stance / technique
Defence

He was presented with the 2015 Junior Athlete of the Year award by Wheelchair Basketball Canada. (wheelchairbasketball.ca, 26 May 2015)

He was named the 2014 Male Youth Athlete of the Year in Mount Pearl, NF, Canada. (wheelchairbasketball.ca, 26 May 2015)
Other sports
He represented Canada in wheelchair basketball at the 2016 Paralympic Games in Rio de Janeiro. (paralympic.org, 2017)
Ambitions
To win gold at both the summer and winter Paralympic Games. (Athlete, 20 Jul 2016)
Impairment
He was born without a femur bone in his right leg, and at age four he underwent rotationplasty surgery. The procedure involved his leg being rotated 180 degrees so that the heel of his foot could act as a knee and allow him to wear a prosthesis. (Athlete, 20 Jul 2016; cbc.ca, 28 Sep 2015)