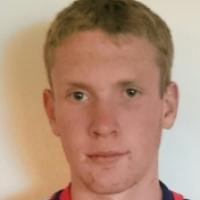 When and where did you begin this sport?
He took up the sport at age 18 in Victoria, BC, Canada.
Why this sport?
He decided to focus on running after Canada failed to qualify a Para football [seven-a-side] team for the 2016 Paralympic Games in Rio de Janeiro.
Club / Team
Prairie Inn Harriers: Victoria, BC, CAN
Name of coach
Bruce Deacon [personal], CAN

Memorable sporting achievement
Claiming the silver medal in the T37 1500m at the 2016 Paralympic Games in Rio de Janeiro. (Athlete, 06 Nov 2019; SportsDeskOnline, 15 Nov 2019)
Awards and honours
In 2018 he won the Sport BC Athlete of the Year Award in the Athlete with a Disability category. (britishcolumbiagolf.org, 04 Apr 2018)

He was named British Columbia Youth Footballer of the Year in 2013. (paralympic.ca, 15 Aug 2015)
Other sports
He represented Canada in Para football [seven-a-side] at the 2015 Parapan American Games in Toronto, ON, Canada. He has also competed in able-bodied ironman events, including the 2020 Hatley Castle 8K as part of the Vancouver Island Race Series in Canada. (paralympic.ca, 15 Aug 2015; Athlete, 06 Nov 2019; athleticsillustrated.com, 23 Feb 2020)
Famous relatives
His younger brother Jack has competed in athletics for the Prairie Inn Harriers Youth Team [PIHYT] in Victoria, BC, Canada. (athleticsillustrated.com, 12 Aug 2016)
Ambitions
To win gold at the 2020 Paralympic Games in Tokyo. (timescolonist.com, 12 Sep 2016)
Impairment
The right side of his body is affected by cerebral palsy due to a stroke at birth. (runningmagazine.ca, 11 Sep 2016; Athlete, 11 Nov 2019)
Other information
FOOTBALL TO ATHLETICS
After Canada failed to qualify a Para football [seven-a-side] team for the 2016 Paralympic Games in Rio de Janeiro, his Para athletics coach, Bruce Deacon, offered him another chance to compete at the Games. "When it looked like the soccer team wouldn't qualify for Rio we made a deal. If they qualified, I would leave him alone to focus on soccer, but if they failed to qualify he would focus on athletics," said coach Deacon. (athleticsillustrated.com, 12 Aug 2016)