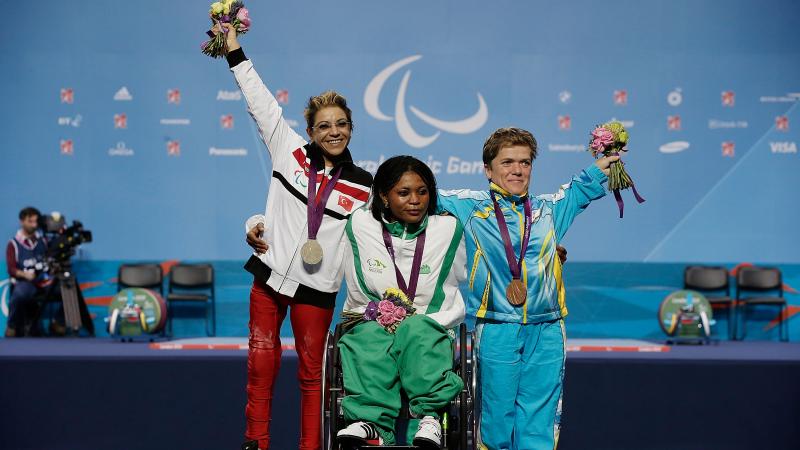 It is strange to see Lidiia Soloviova leaving a competition without any medal. But it happened at the 2017 World Championships, with the Ukrainian powerlifter finishing fourth in the women´s up to 50kg.

It was Soloviova’s first major setback as she could not reach the podium at a major international competition for the first time ever. Few had doubts, though, that she would bounce back and would be seen on a podium soon again.

In 2018, she won the Fazza World Cup in Dubai, United Arab Emirates, followed by silver at the European Open Championships in Berck-sur-Mer, France.

Soloviova was at college when coach Lilia Ginkul asked her to join a group of volunteers to try powerlifting. She was the smallest of them all, but managed to lift nothing less than 57kg, showing natural talent for the sport.

That was only the start of a highly-successful career which saw her take her third Paralympic gold at Rio 2016, the first in the women’s up to 50kg.

Soloviova, who was born with chondrodystrophy, knows about overcoming challenges since she was a little girl. Her parents gave her up for adoption soon after she was born. Later in life, she was reunited with her birth mother who recognised her from media coverage of her sporting success.

She also holds three golds, one silver and one bronze at Paralympic Games since making her debut at Sydney 2000. Soloviova also claimed the European title in 2015.

In recognition of her many victories, she has received the Order of Princess Olga [second and third grades], and Order for Special Merits in Ukraine.

When and where did you begin this sport?
She took up the sport in 1999 in Dnipro, Ukraine.
Why this sport?
While she was at college, coach Lilia Ginkul was looking for some volunteers to try powerlifting. She was the smallest volunteer but managed to lift a weight of 57 kilograms without any preparation.
Club / Team
Invasport: Dnipro, UKR
Name of coach
Oleksandr Alfyorov [personal], UKR

She has received the title of Honoured Master of Sport in Ukraine. (dsmsu.gov.ua, 31 Dec 2020)
Milestones
At the 2016 Paralympic Games in Rio de Janeiro, she became the first Para powerlifter to represent Ukraine in five editions of the Paralympic Games. (SportsDeskOnline, 28 Apr 2021)
Ambitions
To compete at the 2020 Paralympic Games in Tokyo. (Athlete, 26 May 2019)
Impairment
She was born with chondrodystrophy, which affects the development of cartilage. (fakty.ua, 25 Sep 2004)
Other information
RETIREMENT PLAN
She contemplated retirement after competing at the 2012 Paralympic Games in London and has suggested that the 2020 Games in Tokyo might be her last competition. "It is a physically challenging sport and you can sustain many injuries. We lift big weights. But I ended up continuing. I want to go to Tokyo. Then I will see if I retire or not. Apart from winning trophies, I want to help raise awareness and grow the sport in my country and the world through my performances." (paralympic.org, 24 May 2018)