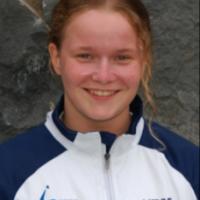 When and where did you begin this sport?
She began swimming at age 11.
Why this sport?
She tried a number of sports during her youth but always suffered sore feet afterwards. She then took up swimming and found there was no pain from her feet, so she continued. "When I jumped into the water it was a completely different feeling. I didn't have the physical limitations I had on land. I felt very free at once."
Club / Team
Sodertalje SS: Sweden

In 2012 she had glandular fever and needed to have her tonsils removed. A setback in her recovery caused her to miss the 2012 Paralympic Games in London. (hammaronytt.se, 23 Mar 2015; nwt.se, 26 Jun 2012)
Sporting philosophy / motto
"All the scars have created who you are and I think there is tremendous power and pride in it." (paralympics.se, 17 Apr 2019)
Impairment
She was born without a fibula bone in her right leg. In December 2016 the limb was amputated below the knee. (Athlete, 15 Aug 2018; nwt.se, 02 Mar 2017)
Other information
PARA CANOE
Following the 2020 Paralympic Games in Tokyo, she chose to take up Para canoe alongside Para swimming. "I will continue to swim, but will in the future also focus on canoeing. My ambition is to compete in both. They are two sports that complement each other well." (Instagram profile, 05 Sep 2021; svt.se, 04 Sep 2021)

AMPUTATION
Born without the fibula bone in her right leg, she did not have the limb amputated until she was age 20. Having competed at the 2016 Paralympic Games in Rio de Janeiro, she made the decision to undergo surgery in December of that year after her foot became increasingly painful. "I was in pain virtually all the time. I knew we had to do something about the problem, and after consultation with the doctor during the autumn, I decided to remove the lower leg. I thought about the complications I might encounter, not least phantom pains. I also had no idea how I would react on a psychological level, as the injured foot has been a big part of my identity for so much of my life. No matter what I did, it would be tough." (nwt.se, 02 Mar 2017)

HOSPITAL PLACEMENTS
As a nursing student she undertook internships at the Central Hospital in Karlstad, Sweden. "I spent a lot of time in children's departments, both in Karlstad and Gothenburg as a child because of my leg. The nurses became my friends and therefore I had no problems visiting hospitals as a child, I felt safe." (kau.se, 19 Jun 2019)