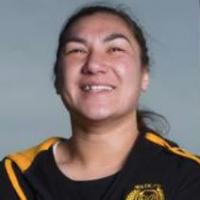 When and where did you begin this sport?
She grew up playing netball and basketball, and began competing in Para athletics in 2018.
Why this sport?
She was featured in a news article while playing able-bodied women's rugby in New Zealand, which attracted the attention of Paralympics New Zealand who invited her to try Para athletics. She thought it could serve as a source of inspiration for her son. "I want to do well so I can give him the platform and stability he needs to follow his dreams some day."
Club / Team
Lake City Athletic Club: Rotorua, NZL
Name of coach
Valerie Adams [sister, personal], NZL

Hobbies
Reading, baking, watching TV. (Athlete, 06 Nov 2019)
Memorable sporting achievement
Being named Most Valuable Player [MVP] at the New Zealand inter-school basketball championships in 2008, and being the first female to play Physical Disability Rugby League [PDRL] for New Zealand. (Athlete, 06 Nov 2019)
Most influential person in career
Her son Hikairo. (Athlete, 06 Nov 2019)
Other sports
She has competed in able-bodied women's rugby in New Zealand for Waikite Rugby Club, and with the New Zealand national men's team at the Physical Disability Rugby League [PDRL] 2018 Commonwealth Championship in Moreton Bay, QLD, Australia. (nzherald.co.nz, 14 Mar 2018; nzherald.co.nz, 05 Aug 2017)
Famous relatives
Her older sister Valerie Adams won gold in shot put at the Olympic Games in 2008 and 2012, and silver in 2016. She has also won multiple world titles. Her younger half-brother Steven is a professional basketball player who was selected in the first round of the 2013 NBA Draft and has since played more than 500 games for the Oklahoma City Thunder. (SportsDeskOnline, 30 Jul 2020; nba.com, 13 May 2019; nzherald.co.nz, 05 Aug 2017; basketball-reference.com, 01 Mar 2018)
Ambitions
To compete at the 2020 Paralympic Games in Tokyo. (newsroom.co.nz, 21 Dec 2020)
Impairment
At an early age she was diagnosed with left-sided hemiplegia. (nzherald.co.nz, 10 Apr 2019, 14 Mar 2018, 05 Aug 2017)
Other information
SISTER AND COACH
Her sister Valerie, a multiple Olympic and world champion shot putter, is her coach. "In competition, she's my coach first. We're pretty good at defining that personal-professional relationship - training, gym, throw circle, she's all coach. It's all about not over-thinking everything, not taking too much on and not over-analysing everything. She's not one of those intense kinds of coach, she's a really firm coach, she trains me like she trains herself. Everyone has those expectations like, 'You have the same last name and your sister has done this so you're automatically going to be world champion and get medals and stuff' - it's not the way it works. At the end of the day, it's still up to me to work my ass off. I've got to get myself there." (nzherald.co.nz, 21 Mar 2019; stuff.co.nz, 09 Mar 2019; newshub.co.nz, 03 Mar 2019; tvnz.co.nz, 15 Feb 2019)

PARA RUGBY
In 2018 she became the first woman to play with the New Zealand national team at the Physical Disability Rugby League [PDRL] Commonwealth Championship. She played with the New Zealand men's squad that finished second at the tournament, and was selected as flag bearer for the opening ceremony. She had previously played able-bodied women's rugby. "It was the first time I had played with other physically disabled people. It was hard to transition, but it was all good. I thought it was weird that I was allowed to play, being the only girl, but I liked it. It was cool. I think what was cool was more than half the people there didn't know PDRL existed and heaps of people actually liked watching the games. I'd like to see it grow and get more girls involved if possible." (nzherald.co.nz, 14 Mar 2018)

ABLE-BODIED RUGBY
In 2017 she played rugby with the Waikite women's able-bodied team, after being spotted by team member Janina Khan who was impressed by her size. She adapted her playing style to tackle and pass the ball using her stronger right side, and helped Waikite win the Baywide competition in New Zealand. "People on the sideline would say, 'Why are you playing that injured girl? She's limping'. They don't realise it's permanent. I was really happy for the girls, like Janina, who have been playing here for a long time, to win the competition. And I was happy as a rookie to start the final and be a part of it. It was a real privilege. I like the contact and doing something different." (nzherald.co.nz, 05 Aug 2017)