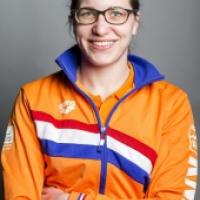 When and where did you begin this sport?
She took up swimming at age four and began competing in 2000.
Why this sport?
She attended a sports day for people with an impairment, where she took part in a Para swimming clinic. After this experience she decided to join the Redeoss swimming club in Delft, Netherlands.

Nicknames
Lieske (IPC, 29 Oct 2009)
Hero / Idol
Dutch speed skater Sven Kramer. (IPC, 29 Oct 2009)
Sporting philosophy / motto
"Anyone who fights may lose, but anyone who is not fighting has already lost." (IPC, 29 Oct 2009)
Awards and honours
In April 2014 she received the Dutch National Swimming Association [KNZB] Achievement Prize. She was the first Para swimmer to win this award. (knzb.nl, 12 Apr 2014)

She was named the Female Athlete of the Year at the 2013 Rotterdam-Rijnmond Sports Awards in the Netherlands. She was the first Para athlete to receive this award. (derotterdammert.nl, 20 Dec 2013)

She was named a Knight of the Order of Orange-Nassau after winning a gold medal at the 2012 Paralympic Games in London. (rijnmond.nl, 11 Sep 2012)
Impairment
She was born with hereditary motor and sensory neuropathy [HMSN], which causes muscle weakness. (lisetteteunissen.nl, 02 Aug 2014)
Other information
RETIREMENT
She decided to retire from the sport in February 2018. "I have no energy to continue with the sport. My disability is progressive and that makes it more difficult to continue with swimming," she said." (knzb.nl, 27 Feb 2018; ad.nl, 28 Feb 2018)