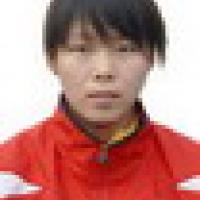 When and where did you begin this sport?
She took up Para athletics in 2004 in Hebei, People's Republic of China.
Why this sport?
She liked sports and wanted to improve herself.

In 2008 she was selected as an Advanced Individual in recognition of her performance at the 2008 Paralympic Games in Beijing. (he.xinhuanet.com, 23 Dec 2015)

She has been presented with the May 4th Youth Medal, which is the highest honour for young people in the People's Republic of China. She is also a recipient of the National May 1st Labour Medal. (wenming.cn, 19 Nov 2012)
Impairment
The impairment to her legs is a result of the effects of polio. She was diagnosed with the illness at age one. (qclz.youth.cn, 16 Jan 2017; he.xinhuanet.com, 23 Dec 2015)