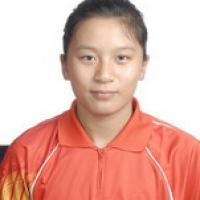 When and where did you begin this sport?
She took up Para swimming in 2004 in Xi'an, People's Republic of China.
Why this sport?
Coach Wang Jilin from the local association for athletes with an impairment visited her hometown. At the time she was working on the family farm, and the coaches were alerted to her potential due to her strength, and large hands and feet.

In 2007 she was named as the Model of Self-Improvement by the Shanxi Federation of Impaired People in the People's Republic of China. (news.sina.com.cn, 19 Jul 2007)
Impairment
Her right leg was amputated below the knee after she was involved in a car accident at age three. (sxdaily.com.cn, 21 Apr 2014)