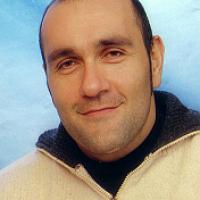 When and where did you begin this sport?
He participated in football, boxing and bodybuilding before his injury. He first tried handcycling in 2004.
Why this sport?
He represented Italy in swimming at the Paralympic Games in 2000, 2004 and 2008, but he was looking for a change. "Having less and less desire to swim, I decided to try a new adventure with handcycling. I already knew I liked it because I used it as part of my swimming training."
Club / Team
Calcaterra Sport ASD [ITA] / Circolo Canottieri Aniene [ITA]:

"I never rest and I'm very modest. Even when I win I have instilled in me that I finished last. My father thought me this and it helps me to remain sharp and stay ahead of my opponent, especially in training." (incodaalgruppo.gazzetta.it, 19 Dec 2019)
Other sports
He competed in swimming at the Paralympic Games in 2000, 2004 and 2008, winning two silver medals at the 2000 Games in Sydney. (SportsDeskOnline, 02 Aug 2015)
Ambitions
To compete at the 2020 Paralympic Games in Tokyo. (incodaalgruppo.gazzetta.it, 19 Dec 2019)
Impairment
He has quadriplegia as the result of a diving accident at age 19. (it.eurosport.com, 14 Sep 2016)
Other information
FUTURE PLANS
He plans to work with children following his retirement from Para cycling. "I take each event as it comes, but I know someday I will have to find something else other than handcycling. I have no limits, only my body will tell me when I have to stop. The benefit of sport helps you both mentally and physically. I would like to remain active and work with young children." (incodaalgruppo.gazzetta.it, 19 Dec 2019)

SWIMMING TO HANDCYCLING
He represented Italy in Para swimming earlier in his career, but retired from the sport following the 2008 Paralympic Games in Beijing. He was invited to get involved in Para cycling in 2011 after receiving a call from national coach Mario Valentini. "I soon regretted having retired [from swimming]. I was no longer happy, I missed training and competitions. There was so much anxiety but the experiences in swimming have taught me to manage emotions and adrenaline. A fundamental quality for these two sports [swimming and cycling] is to endure mental fatigue. I would say this is the secret to getting to the top both in swimming and in handbike." (comitatoparalimpico.it, 29 Aug 2019; bari.repubblica.it, 18 Sep 2016)

BOOK LAUNCH
In 2018 he released a book called 'The Prison of the Impossible'. "Life has to be discovered in all its thousands of possibilities. I always make the comparison with the movie 'Sliding Doors', if I hadn't opened the pool door that day thirty years ago, falling in love with swimming and training, now I don't know what I would be. I might have aged prematurely, I would not have visited half the world and all its wonders. I would perhaps be depressed and still angry with life." (comitatoparalimpico.it, 29 Aug 2019; ruvoviva.it, 19 Apr 2018)

FATHERHOOD
He is motivated by his son's presence at competitions. "The joy of my son when he sees me coming first. When I finish second, he almost doesn't look at me. When I risk giving up, I think of him, of his happiness. I can't wait to hug him again, smiling." (bari.repubblica.it, 18 Sep 2016)