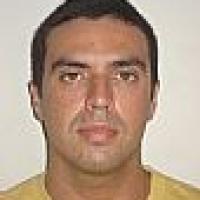 When and where did you begin this sport?
He began swimming in 1995 in Recife, Brazil. After watching the 1996 Paralympic Games in Atlanta on television, he decided to start taking swimming seriously so he could compete at the 2000 Games in Sydney.
Why this sport?
He began swimming as part of his therapy, and also to fill up the time while his sister was at ballet classes.
Club / Team
AABB Recife: Brazil
Name of coach
Manoel Souza [club], BRA

He was part of the relay as the Olympic torch made its way through Recife, Brazil, ahead of the 2016 Olympic Games in Rio de Janeiro. (recife.pe.gov.br, 30 May 2016)
Impairment
He was born with congenital malformation of his lower limbs and his right arm. (brasil2016.gov.br, 05 Aug 2016)
Other information
PARALYMPIC EXPERIENCE
He won a total of seven medals competing at the Paralympic Games in 2000, 2004 and 2008. Although he did not qualify for the 2016 Games in Rio de Janeiro, he worked there as a volunteer. (SportsDeskOnline, 18 Apr 2017; g1.globo.com, 09 Sep 2016)

FURTHER EDUCATION
He has studied for a postgraduate degree in sports coaching at the University of Pernambuco in Brazil. (Athlete, 02 Dec 2017)