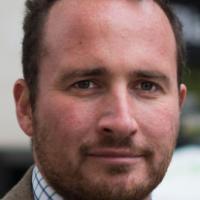 When and where did you begin this sport?
He took up Para athletics in 2016.
Why this sport?
After deciding to stop sailing he sat down with his wife to work out how he could get to the Paralympic Games. "What could I also be decent at? I landed on athletics because I wasn't too bad at running at school. As soon as I made the decision I gave it a go. And while it didn't go particularly well, I was buzzing. I called British Athletics and said I wanted to try out and then I found myself on an accelerated process."
Club / Team
Bournemouth Athletic Club: England
Name of coach
Roger Keller [personal]

Hobbies
Flying microlight aircraft. (farnhamherald.com, 23 Jul 2016; Twitter profile, 01 Feb 2021)
Memorable sporting achievement
"My greatest sporting memory so far has to be when I won my gold medal at the Invictus Games. I took my children onto the podium with me. It's those moments to remember when the training may not be going so well that helps you to get through it and ultimately makes all of the hard work and pain worth it." (canaccordgenuity.com, 27 Aug 2019)
Hero / Idol
British decathlete Daley Thompson, hot air balloon pilot Brian Jones. (canaccordgenuity.com, 27 Aug 2019)
Sporting philosophy / motto
"For me, having a can-do attitude means never knowing when to quit. No matter what obstacles are thrown your way, you see it through to the end." (canaccordgenuity.com, 27 Aug 2019)
Awards and honours
Along with fellow veteran Nathan Cumberland, he was joint winner of the 2019 Inspiration Award at the Soldiering On Awards, which recognise members of the British Armed Forces. (dmws.org.uk, 08 Apr 2019)
Other sports
He competed in Para sailing at the 2013 World Championships in Kinsale, Ireland. He also competed in swimming and rowing at the 2016 Invictus Games in Orlando, FL, United States of America. (SportsDeskOnline, 10 Oct 2019; mirror.co.uk, 10 May 2016; rya.org.uk, 2014)
Ambitions
To compete at the 2020 Paralympic Games in Tokyo. (theguardian.com, 18 Jul 2017)
Impairment
In November 2010 he was injured by an improvised explosive device [IED] while serving in Afghanistan as a captain in the Royal Engineers unit of the British Army. The explosion resulted in the loss of both his legs above the knee and injuries to his left arm. (bournemouthac.co.uk, 15 May 2016; itv.com, 10 Sep 2012; mirror.co.uk, 27 Jan 2012)
Other information
AVIATOR
He has a pilot's licence and is a trustee of the British charity 'Flying For Freedom', which helps injured serving and former military personnel to fly in light aircraft. The group plans to fly to Antartica but the expedition was put on hold while he trains for the 2020 Paralympic Games in Tokyo. "For as long as I can remember I have always been fascinated with flying. It was my intention to fly in the military. Racing across the skies I felt free, I didn't feel like a man who had lost his legs, I was on a level playing field." (forces.net, 01 Mar 2019; lukesinnott.com, 19 Aug 2018)

LONDON 2012
He was part of the closing ceremony at the 2012 Paralympic Games in London, climbing to the top of a flagpole to hang the flag of Great Britain. (itv.com, 10 Sep 2012)