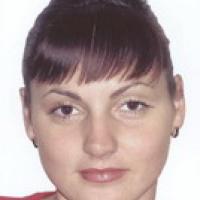 When and where did you begin this sport?
She took up para-Nordic skiing in 2002.
Why this sport?
She had always enjoyed endurance sports that require movement using the whole body. Mykola Vorchak, a national coach, advised her to try competing, as he was convinced she would be successful.
Club / Team
Invasport: Kharkiv, UKR
Name of coach
Nikolai Vorchuk, UKR; Valery Kazakov, UKR

She holds the title of Honoured Master of Sport. (vecherniy.kharkov.ua, 07 Feb 2013)
Other sports
She has competed in both biathlon and cross-country at the Paralympic Winter Games. (Athlete, 09 Mar 2014; paralympic.org, 2014)
Ambitions
To win a gold medal at the 2014 Paralympic Winter Games in Sochi. (kharkov.mycityua.com, 26 May 2010)
Impairment
She was diagnosed with cerebral palsy as a child. (other.sport.ua, 23 Mar 2010; Athlete, 09 Mar 2014)