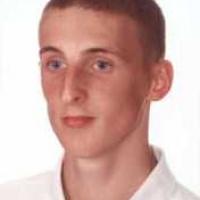 When and where did you begin this sport?
He took up Para athletics in 2005 in Strzelce Krajenskie, Poland.
Why this sport?
His high school physical education teacher referred him to an athletics coach.
Club / Team
START Gorzow Wielkopolski: Poland
Name of coach
Zbigniew Lewkowicz [club], POL

His training was disrupted ahead of the 2017 World Championships in London, England, due to a left foot injury. (wyborcza.pl, 25 Jul 2017)

In 2010 he injured his right heel and was out for seven months. (Athlete, 24 Apr 2012)
Sporting philosophy / motto
"Do what you love and what makes you smile." (Athlete, 21 Jul 2017)
Awards and honours
In 2016 he was presented with the Knight's Cross of Order of the Rebirth of Poland. The honour was in recognition of his performance at the 2016 Paralympic Games in Rio de Janeiro. (prezydent.pl, 05 Oct 2016)

He was named the 2012 Discovery of the Year by a Polish national sports review poll. (oczygorzowa.pl, 12 Mar 2013)
Ambitions
To compete at the 2020 Paralympic Games in Tokyo, and to compete against able-bodied athletes at the 2020 Olympic Games in Tokyo. (MrMichalPol YouTube channel, 25 Aug 2018; echogorzowa.pl, 28 Jun 2018; paralympic.org, 27 Sep 2016)
Impairment
He was born with left club foot. He has muscle atrophy in his lower leg and calf, and almost no range of motion in the ankle joint. (gazetalubuska.pl, 19 Sep 2012)
Other information
FRIENDSHIP
He has become friends with teammate Lukasz Mamczarz through Para athletics. "High jumping connected us, we spent so many years next to each other, we have trained at the same club under the guidance of the same coach, we live in the same city, we just clicked right away and we knew that we are going to be good friends," explained Mamczarz. However, they both admit that they are still rivals when they compete in combines class events. "We are friends and there is only fair competition between us, in high jump, we are like family. However, we even joke that we can be a real family one day, because Lukasz has a daughter and I have a son." (MrMichalPol YouTube channel, 25 Aug 2018)