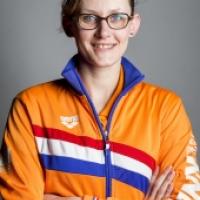 When and where did you begin this sport?
She took up swimming in 1995.

In 2012 she received a community award from the mayor of Bunschoten in the Netherlands, for her achievements at the 2012 Paralympic Games in London. (burgemeesterbunschoten.nl, 17 Sep 2012)

In 2010 she was presented with the Auke Vleer Achievement Prize at the 2009 Enschede Sports Gala in the Netherlands. (enschede.nl, 29 Jan 2010)

In 2005 she was named the Female Athlete of the Year in Oldenzaal, Netherlands. (oldenzaal.nl, 2013)
Other information
OTHER STUDIES
She is a qualified hotel hostess after completing her studies at the Amersfoort Hotel School in the Netherlands. (Facebook profile, 24 Jul 2018, 09 Oct 2016)