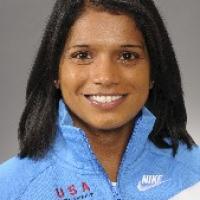 When and where did you begin this sport?
She first tried athletics at age five.
Why this sport?
She was the only student who used a wheelchair at her school. A coach there suggested she give athletics a try, and she was a natural from the start.

Nicknames
Maggie (teamusa.org, 15 Jul 2012)
Hobbies
Scuba diving, skiing, volunteering, listening to music, spending time with family and friends, yoga, zumba. (nj.com, 29 Dec 2013; teamusa.org, 15 Jul 2012)
Memorable sporting achievement
Competing at the 2008 Paralympic Games in Beijing. (maggieredden.com, 2013)
Awards and honours
She has twice received the Wheelchair and Ambulatory Sports Spirit of Excellence Award, first in 2002 for her performance in field events and again in 2005 for her results on the track. (wasusa.org, 20 Nov 2012)
Other sports
She played wheelchair basketball for her university. (usparalympics.org, 19 Oct 2010)
Impairment
Her impairment is the result of polio, which she contracted as a baby. Born in India, she was living in an orphanage before being adopted by her US mother at age two. (shishursevay.org, 13 Jan 2012)
Other information
INDIA TO UNITED STATES
She was born in Kolkata, India. At age two she was adopted from an orphanage by Patricia Redden and moved to Jersey City, NJ, United States. (nj.com, 29 Dec 2013)

OTHER ACTIVITIES
She is a certified scuba diving and skiing instructor, has played the harp as a member of the Eily O'Grady Harp Orchestra at Carnegie Hall, New York, and was named Ms. Wheelchair New Jersey in 2013. She also spent the majority of 2012 living in Kolkata, India, working as director of communications for the children's charity Shishur Sevay. (nj.com, 29 Dec 2013; teamusa.org, 15 Jul 2012; shishursevay.org, 13 Jan 2012)

OCCUPATION
She is a part-time interpretation associate at the Liberty Science Center in Jersey City, NJ, United States. (nj.com, 29 Dec 2013)